In 1987, as a consequence of having lost my Gibson ‘Country & Western’, I asked my friend Chris Eccleshall if he could build me a guitar. I had known Chris for a couple of years through playing in London folk clubs and had visited his guitar workshop in Acton on a couple of occasions. Chris had already a fine reputation as a luthier and had done some work for Mark Knopfler, among others. Now, even though I had been happy with the Country & Western, I had been wanting a J-45 since I had become better aquainted with Gibson guitars, their sound, looks and mojo. So I asked Chris if he could build me one to that specification. Of course, that was no problem at all for Chris. Actually what he built was more to a J-50 spec’ since it didn’t come with a sunburst finish and that is the only difference between a J-45 and a J-50, anyway. We also agreed that we should dispense with the pickguard. My guitar wasn’t part of Chris’ normal “line”, so it’s model ID was designated ‘Special’ and it came with my name engraved in the back of the headstock. 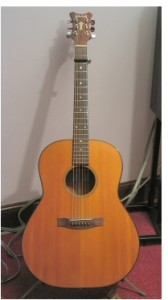 The guitar is technically a jumbo and has a spruce top and mahogany back and sides. It’s voice has a terrific projection and has a very identifiable “whump” in the bass, so characteristic of good examples of Gibson guitars. The top has plenty of “air” to it and there is never any hint of congestion or . The guitar likes to be driven and underpins the momentum of rhythmic material extremely well.

When I had a stock Gibson J-45 for a couple of years in the 90s, I found I actually preferred the Eccleshall’s voice – something about it’s relative maturity, maybe – it seemed more three-dimensional, somehow.

When I became enamoured of the Martin “sound” in the mid-nineties and traded the J-45 for my Martin OOO-28, the Eccleshall was played very little for a few years and remained in its case more or less permanently, to keep it out of harm’s way. That’s changed, though, and I’m finding I’m using it (for the time being) for keeping my “chops” in reasonable shape by playing blues and jazz stuff that I’ve picked up over the years – and still finding.

The Eccleshall wasn’t used for any of the songs on Interim Reports, but it’s back in the frame for a song or two in the next project (aka Uneasy Listening).